SINGAPORE (THE BUSINESS TIMES) – Oxley Holdings will see $2.2 billion of revenue flow into the group from its Singapore and overseas projects as construction progresses, its chief executive Ching Chiat Kwong said in an update amid the coronavirus pandemic.

“$1.4 billion of secured revenue from our Singapore projects and $819 million from overseas projects will flow into the group as construction progresses, based on our effective stake,” said Mr Ching in the release to the Singapore Exchange on Friday (May 1). “The total $2.2 billion of revenue places Oxley in a strong position despite the turbulent times.”

The mainboard-listed developer is also on track to redeem its $150 million worth of bonds due May 18, 2020,” he added.

Oxley also said it has achieved its sales targets for its Singapore projects. It said 2,858 of 3,923 residential units, or 73 per cent of its development portfolio here, had been sold as at April 30.

In Kuala Lumpur, its KLCC project – which comprises two residential blocks and two hotels – has sold 222 of the 590 residential units available. Project construction has slowed due to the Covid-19 measures, it said, although its main contractor is striving to complete the KLCC Oxley Towers on schedule.

Its Dublin Landings project in Ireland is on track to complete construction this year, with construction expected to restart early next week following a government-enforced shutdown to control the pandemic. All five commercial buildings have achieved practical completion and have been sold to third parties, while one of the eight residential buildings has been handed over to the buyer, Greystar, said Oxley.

Meanwhile, its flagship project, Royal Wharf in London, has sold more than 95 per cent of its 3,380 residential apartments and construction of the project is expected to be fully completed by year end. Over 2,800 units have been delivered to buyers as at April 28.

In an update on its project The Peak in Phnom Penh, its new contractor China Railway Urban Construction Group Co has made “remarkable progress” since taking over two months ago, Oxley said in the release to the Singapore Exchange. The Peak consists of 2,358 residential, office and retail units. A total of 85 per cent of the units have been sold, and the project is expected to be completed progressively from mid-2020.

Shares in Oxley closed at 23 cents on Thursday, up half a cent.

SINGAPORE – The new polyclinic in Serangoon that will be completed by 2025 will be across the road from Nex shopping mall and Serangoon MRT station, noted Mr Seah Kian Peng, an MP for Marine Parade GRC.

Mr Seah, who is also chief executive of the FairPrice Group, said that the polyclinic will be Singapore’s largest.

The Ministry of Health (MOH) confirmed that the polyclinic will be the largest by floor area. No other details were available.

There will also be dietetics, psychology and diagnostic services.

The Serangoon facility is among 10 to 12 new polyclinics that will open in the coming years, in locations that include Bukit Panjang, Eunos, Kallang, Sembawang, Khatib, Tampines North and Yew Tee.

It said in late November that two new polyclinics – in Kaki Bukit and Tengah – will also open by 2025.

Senior Minister of State for Health Lam Pin Min said at a community event in late November that as the population ages, it is important to anchor some of the care of patients with chronic diseases in the community.

SINGAPORE – The alignment of Phase 1 of the MRT Cross Island Line (CRL) has been finalised.

Transport Minister Khaw Boon Wan said on Friday (Jan 25) that this first stretch will be 29km long. It will have 12 stations and pass through areas such as Changi, Loyang, Pasir Ris, Hougang and Ang Mo Kio.

“When it is completed by 2029, more than 100,000 households will enjoy better connectivity and shorter travelling times,” Mr Khaw said.

He said Bright Hill, a station on the CRL which is also on the Thomson-East Coast Line, “will further expand to become an interchange station with the CRL”.

Phase 1 of the CRL will have three other interchanges – at Ang Mo Kio with the North-South Line, at Hougang with the North East Line and at Pasir Ris with the East-West Line.

The CRL will be Singapore’s eighth MRT line.

Mr Khaw revealed that its depot, the Changi East Depot, will be a surface depot, and not underground as originally planned.

He also announced that the first stage of the Thomson-East Coast Line will open before Christmas this year.

It is predicted that the CRL will have an initial daily ridership of 600,000, and eventually one million, making it Singapore’s most heavily used rail line.

Construction of Phase 1 will begin next year and four of the stations will be interchanges linking with other lines.

Stations will be designed and built to accommodate eight-car trains, but the line will operate with six-car trains initially.

The line will serve areas which currently have no MRT access, such as Serangoon Gardens, Serangoon North and Aviation Park in Changi. The line may be extended to link up with Changi Airport.

Mr Khaw said the entire CRL will support hubs outside the Central Business District, “so that jobs are nearer homes”.

He said the CRL will also redistribute passenger load on the North-South, East-West and North East lines, “so that the over-crowdedness that our commuters experience now will be eased”.

Mr Khaw added: “Commuters will have more journey options… Many will benefit from shorter journeys and faster travel times.”

The CRL will pass through Paya Lebar airbase, which is slated to be relocated from 2030. An area of about 800ha will be freed up.

However, no station has been planned for this stretch.

No information was given about the second stage of the CRL, which involves the possibility of tunnelling beneath Singapore’s Nature Reserve.

The whole line is slated to be completed by 2030, doubling Singapore’s rail network to 360km and enabling 80 per cent of households to be within a 10-minute walk to a station.

Commuter Charissa He, 29, said she is happy that there will be a station in Serangoon North, where her future home will be.

The marketing professional added that the CRL “is a good line, as it allows passengers to switch to other lines easily, and ease choke points”. 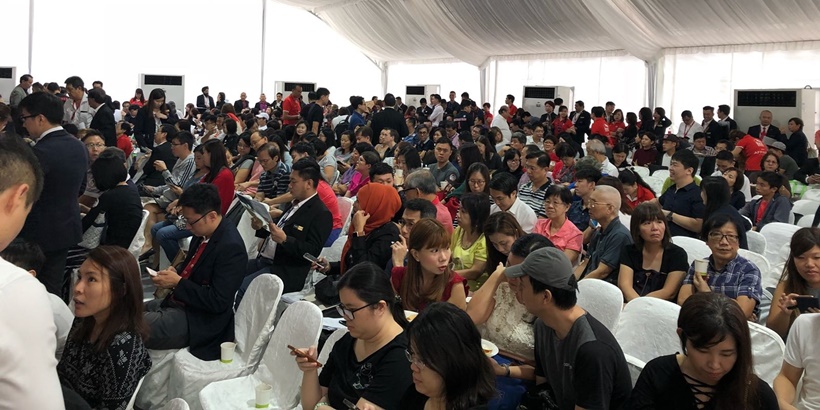 Two new project launches in the Serangoon area (District 19) reported more than 170 units sold during Phase 1 sales over the weekend.

Affinity at Serangoon sold 112 of the 300 units released, while The Garden Residences moved more than 60 units. Both are 99-year leasehold projects located at Serangoon North Avenue 1.

Units at Affinity were sold at an average price of $1,575 psf, while those at The Garden Residences went for slightly higher at $1,660 psf on average.

Singaporeans accounted for 80 percent of the buyers at Affinity, while the remaining 20 percent were foreigners and permanent residents.

Developed by an Oxley-led consortium, Affinity comprises seven blocks of 1,012 one- to four-bedroom apartments from 463 sq ft to 1,453 sq ft and 40 strata landed houses.

There will also be five retail shops and 88 facilities including a floating boardwalk, firefly path and a luminescent plankton cove.

Nearby amenities include Chomp Chomp Food Centre, Serangoon Garden Market and Nex shopping mall. There are also several schools in the vicinity such as Rosyth School, Nanyang Junior College and the French School.

The sprawling 296,193 sq ft site was formerly the Serangoon Ville HUDC estate, which was sold en bloc for $499 million in July last year. The purchase price works out to a land rate of $835 psf per plot ratio.

“We saw strong demand from former Serangoon Ville residents who are keen to live in their familiar area, and now also have the purchasing power to upgrade for themselves and younger generations,” said Oxley executive chairman and CEO Ching Chiat Kwong.

Meanwhile, The Garden Residences is a 613-unit project comprising one- to five-bedroom apartments from 452 sq ft to 1,981 sq ft spread across five 15-storey towers. The extensively landscaped development is expected to be ready by 2021.

“We have confidence in the market, and believe that discerning buyers will appreciate the convenient location, attractive design, quality fittings and finishes as well as the lifestyle offerings at The Garden Residences,” said a spokesperson from the developers Keppel Land and Wing Tai Asia.

WhatsApp Us For More Details!